CALLING ALL FANS OF KPOP!

Do you live and breathe KPOP? Are you constantly finding yourself spending countless hours perusing the internet for the latest news and hottest photos of your favorite KPOP groups? Do you love KPOP female stars? Well, you're not alone. We share the same love and passion for KPOP as you do, and we just can't get enough! That's why we compiled a list of the 15 BEST KPOP groups (in no particular order) of all time, and you'll definitely be needing a hand fan after getting through this listcle. If you consider yourself a fan of KPOP and don't know who BIGBANG is, well, it looks like you might want to go back and do your homework. For the American pop fans out there, BIGBANG is basically the N*SYNC of KPOP, holding multiple awards and selling millions of copies throughout their career. Initially signed by YG Entertainment, G-Dragon, T.O.P, Taeyang, Daesung, and Seungri started their career in 2006.

Throughout the years, they've made their way through thick and thin and was later named "Kings of KPOP" for their hard work and dedication. Selling on average of 4 million downloads per title and 1 million downloads per non-title track, these legends had made a footprint in the history of KPOP and will forever be respected and loved.

What's better than having a group of five super hot and talented Korean guys singing and dancing like bosses? How about 10 super hot and talented Korean guy singing and dancing like bosses of those bosses? Thats right, Super Junior goes down in history as one of the 15 best KPOP groups because of their style, irresistible charm, and their incredible talent for music.

The band first formed in 2005 by S.M. Entertainment and at one point had 13 members, which in our opinion, the more the merrier! ​Since the members are multi-faceted talents, they also have been featured as actors and hosts for various TV shows in Korea. Super Junior has also been name "Best Selling KPOP Artist" 4 years in a row, and has won multiple international awards.

This super hot vixens have made their name heard in the KPOP scene. Comprised of members CL, Bom, Dara, and Minzy (who later left the group in April 2016), the girls first debuted in 2009 with BIGBANG in a commercial for LG featuring the song "Lollipop".  The ladies talent and all-around badassery led them to winning two Song of the Year awards, one for "I Don't Care" in 2011 and the second for "I Am The Best" in 2012.

The girls of 2NE1 not only made an heart pounding statement with their catchy, rhythmic beats and hard-hitting electronic sound, they also made an impact on style. The ladies pushed the fashion envelope of KPOP altogether, developing their own unique image that inspired millions across the globe. 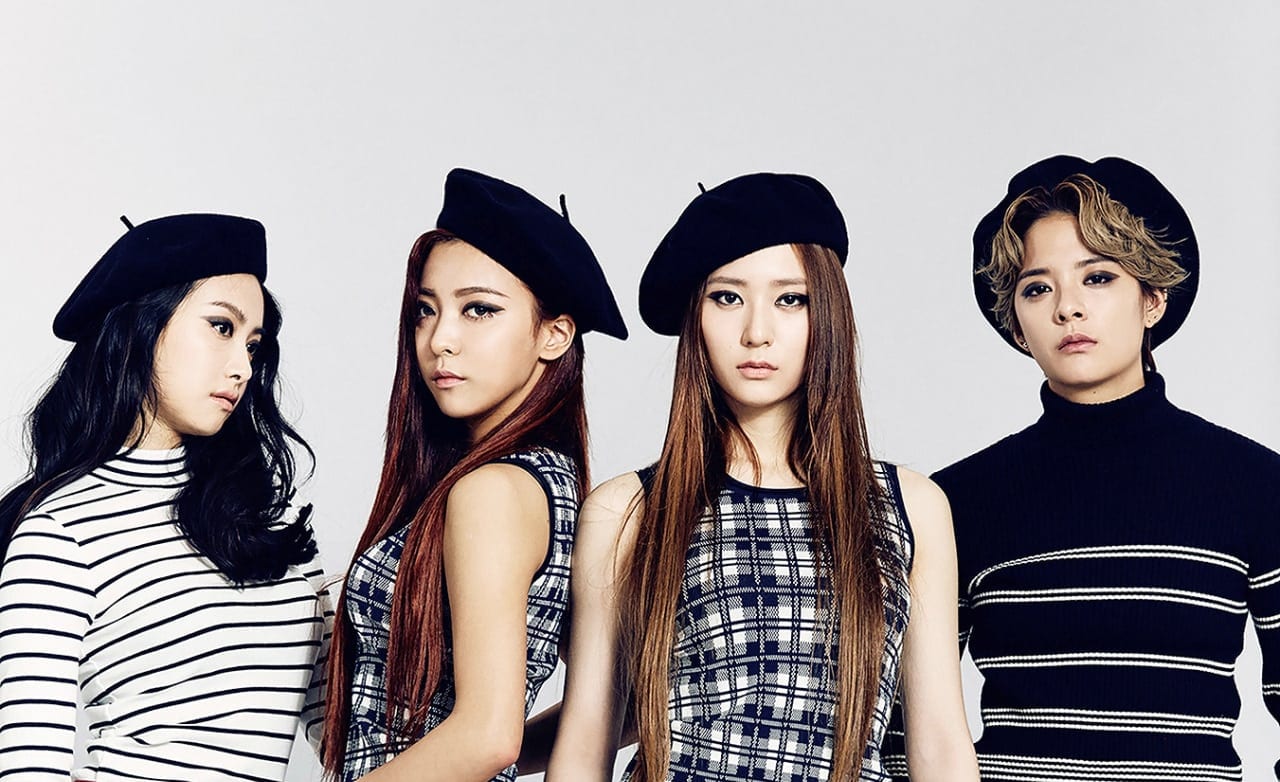 In 2009, F(X) made their first appearance into the world of KPOP by S.M. Entertainment. The girl group initially began with five members: Victoria, Amber, Luna, Krystal, and Sulli who parted ways with the group to pursue her acting career in 2015. Paving their way through many other competition, these girls made their name by delving into the American music scene where they were the first KPOP act to perform at SXSW.

Not only do these girls own the stage with their effortless dance moves and vocals, they also have created a sound that's unique to their scene. The cool electronic vibes and experimental style makes​ F(X) a KPOP group you MUST listen to. We couldn't resist posting one of their well known classic songs, and we know you'll love it too. SHINee (pronounced "Shy-knee") is one of the most well-known and popular of all the best KPOP groups not only because of their immense stage talent, but also there eye-catching style. They even created their own fashion trend that spread across Korean schools called the "SHINee trend" which includes skinny jeans accompanied with color baggy sweaters. They rep their signature style in their artistically fashioned music videos and futuristic themes that create eye popping reactions to their fans.

Comprised of 5 band members including Onew, Jonghyun, Key, Minho, and Taemin and debuted by S.M. Entertainment, the band has won numerous MNET awards for their slick skills on the dance floor. They also love to mix and mashup their sound and style, releasing several different genres of music and dance throughout their career. EXO is a twelve member group debuted by S.M. Entertainment in 2011. The group was divided into to subgroups, EXO-K (Korea) and EXO-M (Mandarin) performing in both languages respectively. However, in May 2014, Luhan, Kris, and Tao had parted ways with the group due to legal issues with S.M. Entertainment.

Regardless of the drama, these hardworking fellas have been putting out hit after hit, selling millions of records and earning the name of "Best Selling Korean Artist" in twelve years. Their impeccable dance moves and killer style make it extremely difficult to peel your eyes away from the screen when watching their live shows or music videos. The band has also experimented in different styles of music ranging from Hip Hop, R&B, Electronic, and Dance. In 2007, Girls' Generation aka SNSD was debuted by S.M Entertainment. The world-renown Korean pop group was originally made of nine members, but later lost Jessica in 2014. The girl group got their claim to fame from one of their most popular hit songs "Gee" that gained immense popularity world wide.

Girls' Generation created so much hype that they ended up being the face of KPOP and KPOP culture internationally. They were the first KPOP group to have 4 songs on YouTube with over 100 million views. They later signed with a Japanese label and created a huge buzz overseas, capturing the hearts of fans around the world. Their colorful style and cute personalities make these girls iconic in the KPOP scene. The boys of BEAST  (B2ST) surely are beasts when it comes to overcoming hardship. When debuted by Cube Entertainment in 2009, most critics were harsh about their performance. They were described as "underwhelming" and "generic," lacking anything new or exciting especially with all of the emerging groups of the time. However, the group persevered and gained notoriety back in 2011 winning "Song of the Year" at the KBS Music Festival. T-ARA (like the tiara you put on your head) is a sexy 6 piece group debuted by Core Contents Media in 2009. These power-house girl group first started out as a 5 piece band. After their first single dropped, two members left group. Management then recruited three more girls, making the band what it is today.

Not only is T-ARA a success story in Korea, the band also had a $4 million contract signed in Japan, where they released multiple hit singles. They are also known as the top KPOP girl group in China. The swaggalicious girl band is known for their sexy dance moves and incredible singing in genres ranging from pop to electro. Compared to some of the best KPOP groups on the charts, BTS aka Bangtan Boys are relatively new in the KPOP scene. However, don't let their fresh start fool you. These talented young men have created a huge fan base and following that many American pop stars fan bases would have a hard time competing with. The group is comprised of seven members: Jin, Suga, J-Hope, Rap Monster, Jimin, V, and Jungkook, each with their own style and swag that keeps the audience begging for more.

The band became a social media phenomenon because of their enormous international fan base. Because of their popularity, Twitter even created a specialized emoji for the band. Billboard even placed them #1 on their Top 50 Social charts.  The boy group shreds amazing dance moves and vocals to genres ranging from EDM, to Rap and Hip Hop. Originally, the band started out as an eleven piece band called "One Day," which later split into two groups: 2PM and 2AM. The band is made up of members Jun. K, Nichkhun, Taecyeon, Wooyoung, Junho, and Chansung. As some of you may know, American rapper Jay Park was formerly the leader of the group and left in 2010.

​The group is known for their incredible acrobatic dance moves and athleticism. They've also done multiple world tours and even did several releases in Japan. If you like sexy, glam, and all around badass girls, 4minute is the perfect KPOP group for you. Debuted in 2009 by Cube Entertainment, the group consists of members Jihyun, Gayoon, Jiyoon, Hyuna, and Sohyun. Many are familiar with the beautiful Hyuna, who also pursues a successful solo career and has released multiple singles.The girls brought glam and swag to the KPOP scene with amazing sexy stylized outfits and killer dance moves.

Unfortunately, due to a disagreement with the contract renewal, Cube Entertainment announced the disbandment of 4minute earlier this year. However, their legacy lives on through their awesome fans and videos on the web. SISTAR is an all-star KPOP girl group put together by Starship Entertainment in 2010. Unlike some of their other competing KPOP girl groups, these girls push the envelop with sex, class, and style. Their adorable personalities and fun loving attitudes make some of their innuendo tracks the best on the charts.

Though many of their singles were hugely popular all over Korea and Japan, their single "So Cool" was the first to ever hit number 1 on the Korea Billboard Top 100. The band is comprised of four members: Hyolyn, Bora, Soyou, and Dasom. U-KISS, which stands for Ubiquitous Korean International Idol Super Star, is a group of six studly members: Soohyun, Kiseop, Eli, Hoon, Kevin, and Jun. The band was formed by NH Media in 2008 in South Korea. However, they've gained a large amount of international popularity, debuting their music in Japan as well as completing several South American tours.

​Not only are the guys of U-KISS amazing stage performers, they also have acting talents. The band has performed in several TV reality shows as well as popular K Dramas. One of the most distinguished KPOP girl groups that has made an internationally known name is Kara. The band was created in 2007 by DSP Media, however, they failed to impress on their first release. Quickly, they redefined their image and released again as a completely new look and sound. The song "Honey" became their number one hit in 2008 and continued to make more awards and recognitions in the KPOP music industry.

In 2014, half of the members parted ways with the group. Seeing a beacon of opportunity, the girls participated in a reality TV show to search for the next newest member. However, earlier this year, their contract with DSP media ended and the band was named disbanded. Later, Kara made a public announcement that they were continuing with their project and new music is soon to come!​

A Brief History of South Korea Then and Now

The Best 6 Dermatologists in Seoul