The Top 10 best Wildlife Holiday Destinations in the World

There's nothing quite like seeing animals in the wild. Though most people would jump at the chance to go on safari in Kenya, it certainly shouldn't be the only country a wildlife lover should visit! There are loads of countries in the world that offer unique wildlife spotting opportunities - you just need to know where to look! In this post, I share my to 10 places to see wildlife, and some of the countries in this list might surprise you... India is one of the best places to see tigers in the wild. With over 70% of the world’s remaining tiger population, your chances of seeing one in the wild are better than most other countries. However, you still have to be quite lucky to get a glimpse of these majestic creatures! When we visited Ranthambore National Park, we were lucky enough to see a huge male tiger on our first game drive, but our two other drives were fruitless. Some people have been to India multiple times but have never seen one!

There are plenty of tiger reserves for visitors to choose from, including Ranthambore Tiger Reserve. Jim Corbett Tiger Reserve and Sunderban Tiger Reserve. Of course, the tigers are what most people are here to see, but wildlife lovers will also be able to spot samba deer, Asian elephants and even Sloth Bears in the wild too. Sri Lanka is one of those countries that has it all - beautiful scenery, tropical weather, friendly locals, a fascinating culture and the most delicious food. But one thing that people don’t realize is that Sri Lanka is also a haven for wildlife. By visiting the country’s National Parks, it’s possible to see monkeys, deer, some fascinating birds, and also the world’s most concentrated population of Asian elephants. One word of warning though: please avoid the cruelty-driven elephant centers masquerading as orphanages, such as Pinnawala Elephant Orphanage. Stick to the wild instead!

Lucky visitors may also spot one of around 800 leopards that also live in the country. They tend to hide in the trees, but the warning calls of peacocks and other animals on the ground will tell you they’re nearby. Keep your eyes peeled! Or if marine wildlife is more your thing, Sri Lanka is still a good place to go. 26 different species of whale have been spotted in the waters around Sri Lanka, including blue whales and humpbacks. Visit between February and March for your best chances to see blue whales during their annual migration. South Africa is vast, making it another great country to spot the Big 5 on safari. Of course, the most well-known National Park, Kruger, is right at the top of most visitors’ bucket lists, but there’s plenty of other places to get your wildlife fix too. Private nature reserves are a great choice for people who like a little more privacy on their game drives. Most only have a few safari lodges or tented camps in the reserve itself, meaning there’s no queueing behind multiple cars at each sighting.

Alternatively, the other national parks such as Addo Elephant Park (famous for its huge population of elephants) and Kgalagadi Transfrontier Park (home to huge black-mane lions amongst others) are great choices too. Another benefit of seeing wildlife in South Africa is that it’s one of the cheapest places in Africa to do it, and you could combine a safari with a trip to Cape Town too! No list of the best places to see wildlife would be complete without mention of Kenya. The ultimate safari destination, Kenya is home to the Masai Mara - one of the most famous national parks in the world. All of the Big 5 call Kenya home, from the majestic big cats of lions and leopards, to rhinos, elephants and buffalo. It’s also possible to see cheetah, hyena, giraffe and a huge variety of birds too.

The Masai Mara is also the home to one of the most impressive wildlife phenomena in the world, the Great Migration. Every July, millions of wildebeest, gazelles, Topi, elands and zebras make the journey from the Serengeti in Tanzania north to the Masai Mara in Kenya. In October, they make the return journey back to Tanzania. Witnessing the migration is surely something every wildlife lover has to do at least once in their lifetimes.

Many wildlife lovers visit Uganda to see its population of mountain gorillas in the Bwindi Forest National Park. Uganda is one of the only countries in the world where it’s possible to see some of our closest living relatives in the wild, but the thing that makes this so special is that you do it all on foot. Imagine trekking through forests, peering through the undergrowth as you spot a giant Silverback Gorilla or its offspring. There’s really nothing quite like it.

In addition to the gorilla trekking opportunities, Uganda is also a good if not relatively well-known place for a traditional African safari. It’s home to 4 of the Big 5 (sadly you’re very unlikely to spot rhinos in the wild here) as well as chimpanzees, giraffes, warthogs and an incredible number of birds too. Unlike most other countries that have borders that wildlife could freely cross, Madagascar has remained an island for nearly 90 million years. That means there’s a huge variety of wildlife and plants that can only be found on Madagascar, which makes it an incredible place to go wildlife spotting. If you go, you’re likely to see animals that very few other people have ever seen in the wild, including all species of lemur and fossa (a cat-like mammal) and a huge number of reptiles and insects too.

Aside from its wildlife, Madagascar is home to some seriously impressive landscapes, including forests, mountains and canyons. This really is a nature-lover’s paradise, and one place that every wildlife enthusiast should go at least once.

Australia is another country that has remained relatively isolated, making it the only place in the world you’ll see animals such as kangaroos, koala bears, platypus, wombats and dingos in the wild. But further than that, Australia’s island state of Tasmania is the only place you’ll find the Tasmanian Devil - a little marsupial made famous by a cartoon of the same name.

With much of Australia covered in arid, unpopulated land, it can be difficult to spot animals in the outback. But don’t let that put you off! The feeling of spotting a koala in a tree, or watching a kangaroo spring through the garden of your hotel is something you’ll get only in Australia.

Probably another unexpected addition to this list, Brazil is actually one of the most biodiverse countries in the world. With 1 in 12 of all species on the planet calling Brazil home, the wildlife spotting opportunities here are second to none. You could spot 20 different species of piranha in the Amazon, so make sure you keep your fingers and toes firmly inside the boat if you go for a paddle! Some visitors could also see howler monkeys swinging from the trees in the rainforests. Even if you don’t see one, you’ll certainly here its roaring call from the trees. Jaguars also live in Brazil’s wetlands, but you have to be incredibly lucky to spot one. Make sure you take binoculars and lots and lots of patience to give yourself a fighting chance.

Brazil is a wonderful place for a multi-centre holiday, mixing wildlife with play. Imagine spending a few days spotting animals in the Amazon, and then relaxing on Copa Cobana beach, reminiscing over all of the wildlife you managed to spot on your holiday! The USA might be well-known for its glitzy Vegas lights, the concrete jungle of NYC or the golden beaches of California, but its National Parks are enough to keep wildlifeenthusiasts happy too. Visit Yosemite for the grizzly bears, Yellowstone for the wolves and Denali National Park for caribou.

Florida is one of the best places in the world to see marine life. Head out on a boat trip in the Three Sisters Springs to see manatees, or on an exhilarating airboat ride in the Everglades on the lookout for alligators and crocodiles - this is the only place in the world where the two animals co-exist!

What Costa Rica lacks in size, it certainly makes up for in its wildlife population. It’s home to 500,000 different species of animal and plant, that can be found from the rainforests to the beaches.

The country's tropical climate and rainforests make the perfect habitat for animals including the infamous poison dart frog, lovable three-toed sloth, the fascinating ocelot cat and plenty of creepy crawlies too. The beaches are home to a large population of turtles, while a boat trip out to the water could treat animal lovers to sightings of dolphins, porpoises and whales too.

So there we have it, 10 incredible places to see animals in the wild. What are your favorite wildlife destinations? Let us know in the comments! 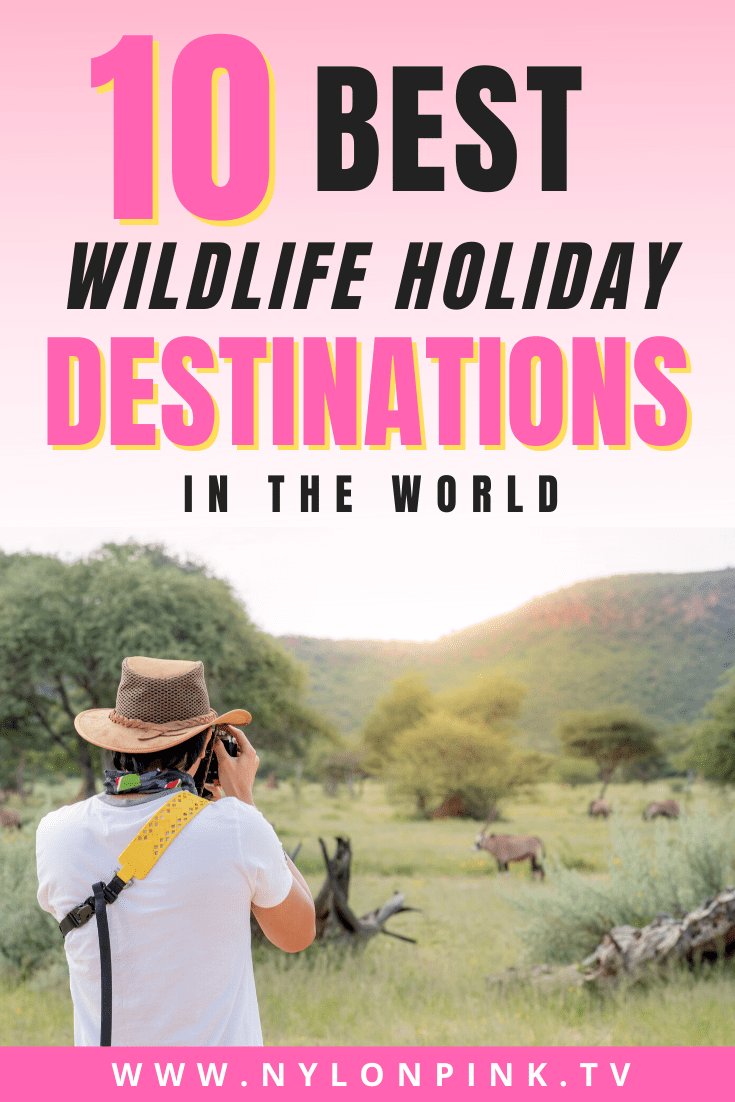 Anna blogs at Would Be Traveller - an ethical adventure blog dedicated to showing us how to travel more responsibly. She is a wildlife enthusiast that loves spending time outdoors, getting closer to nature and practicing her wildlife photography at any opportunity she gets.

Swimming with the Sea Lions of Peru

Want to hear the latest news, giveaways, and tips on Travel? Sign up for our newsletter!